skip to main | skip to sidebar
"Your path is to be shared...It will be called The Golden Thread Road"
~White Buffalo Calf Woman

For Kirin Out Loud 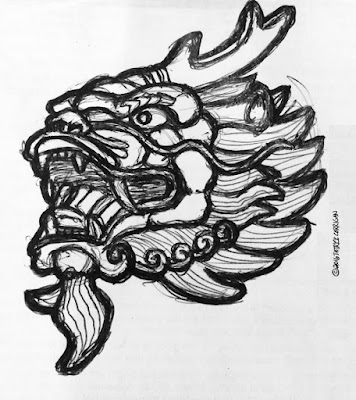 It started a few days ago, though I'm not sure how it exactly began. Being endlessly fascinated by words and puns, I suddenly found myself pondering what a Shroud of Kirin (instead of the famous Shroud of Turin) would look like. I mentally wrapped my hypothetical Kirin, a very dragon-like Japanese unicorn, with a death shroud in various ways, contemplating different positions for my beast and how its image would impress itself upon the white cloth.

To aid me in my research, I found some images online from which to draw, in order to familiarize myself with the basics of the Kirin form. One particular drawing of a roaring, gaping-jawed head would not release me from its hypnotic gaze, and that evening when I attended a meditation group, each time I closed my eyes I saw the liquid form of the Kirin undulating before me, it's fearsome face close to my own. Then, in half-remembered dream-like flashes, it was joined by companions who swooped and twisted and swirled gracefully about each other as if in an underwater ballet, their manes and whiskers flowing about them like muppet hair.

And that wasn't the end of it. The next day I had to get a new phone, and as I was talking to the store worker, I noticed something...
"Is that a Kirin tattoo on your arm?"
"Yes it is! I'm surprised you knew that. Most people don't"
...Yeah. When a Power Animal wants to be noticed, they know how to get my attention.

So I read a little about them, finding out the basics, but feeling I needed to know more, particularly because I had decided to feature Kirin in my weekly "Totem Tuesday" post on my Perching Wolf Studios page on Facebook, I realized I needed to talk to Kirin in person. So I journeyed.

The rattle had hardly commenced its rhythmic beat, with which my brain had just barely begun to shift into entrainment, when suddenly a huge Kirin face loomed, almost nose to nose with me. I was startled at the size of the head as well as its abrupt appearance before me, and simultaneously I felt engulfed in that sense of awe which accompanies being in the presence of royalty.

I bowed before him (I think I called him "Your Excellency") and said what an honor it was to stand before him. He replied by telling me I need not bow and that he was here for me, at which he closed his eyes and lowered his great head over an extended cloven hoof. As I watched this display of humility, I just could not get over his size. I guessed he would be a relatively large animal, having read comparisons to deer or oxen, but he was HUGE. He reminded me of the Luck Dragon from the movie,  Neverending Story. He also reminded me very much of the Chinese Dragon dance costumes I'd seen, in size, appearance, and in the way he moved.

He rose upright again, towering over me, and though he stood in one place, he seemed to be in constant motion. His massive head bobbed and swayed back and forth, and looking at his body was like watching a single point in a river with its surface riding the tireless rise and fall of its waves. Perhaps it was the distortion of the air from the heat of his body. Is that why they are often depicted surrounded by flames? His energy was much more dynamic than the stable, earthy energy of Amaranth, my Western Unicorn spirit guide.

Finally, my sense of awe having receded just enough for me to form cohesive thoughts again, I asked him what his medicine was. Why was he here?

"As I said, I am here for you. I am the guardian of thresholds, appearing when one has crossed a particular initiatory point and stepped into authority. I close the door behind you to the old paths you needn't experience again. I am the harbinger of the arrival of a new dawn, ripe with endless possibilities."

I knew from my reading that Kirins only ever really appeared at the birth or establishment of a wise sage or a benevolent ruler. I don't know that I'm either of those things, but apparently I had leveled up. This made me wonder -- if he were here for me, now that his message had been delivered would he be off to Kirin-land, or was he going to be around for awhile?

"I'm here to see you through the establishment of this new chapter. I will be your guardian and protector."

"Cool! So you'll be here a while. I should probably know you're name then."

Posted by PATRICK at 1:15 PM No comments:

Thank you for accompanying me along my path, however long you may linger here. What you are reading is a chronicle of my explorations into my life and spirituality, particularly through my shamanic studies and my passion for cartooning.

What is 'The Golden Thread Road'? I will endeavor to answer this through the course of my blog, but in short, it is my life path. In the late 80s I had a vision in a meditation where I saw my life unfolding in front of and behind me in the form of an endless golden thread.

This vision has stayed and evolved with me through the years, forming one of the basics of a continuing and growing body of personal mythology. It is my life at its essence, distinct and unique, incorruptable and indestructable, stretching without end.

This blog is the expression of the unfolding of the lessons and challenges, thoughts and prayers, poems and art, hopes and dreams, that form this thread.

I hope you enjoy your time here. Welcome to the Golden Thread Road.

PATRICK
Patrick is a Cartoonist, Shamanic Practitioner, and Bard. He enjoys expanding his intuitive and shamanic skills, and can frequently be found napping with his kitty or watching Robin Hood movies, sometimes simultaneously.

WHERE ELSE TO FIND ME

Or to check out my latest Classes and Events~

The Collected ...
Vol 1
By Patrick Corrigan

Or other Fun Merchandise inspired by my comics and blog:

Chakras - 7 energy centers that sit at different points in the human body, corresponding with the various glands. Each one is connected with a different function of the body and how it relates to the spirit.

Chanupa -What has become known as the Peace Pipe, it is one of the most sacred forms of worship to Native cultures.

Deva - The overlighting soul, spirit, or angel of a species of animals, plants, or elements (Earth, Air, Fire, Water).

Jyorei - A Japanese form of energy healing, related to Reiki, that concentrates on the 6th and 7th chakras.
Medicine - According to Native traditions, the special power and energy of an individual, as in the unique gift they have to contribute to the world.
Psychopomp - From an ancient Greek word meaning "Guide of souls," it is working with departed souls and helping them to fully cross over into the afterlife.
Reiki - An energy healing technique that works with a person's energy system and chakras.

Shamanic Journey - A method of achieving an altered state of consciousness through repeated drum beats or rattles, by which you "journey" to the other worlds (upper world or lower world) where your spirit guides exist.

Soul Retrieval - A shamanic practice of retrieving parts of a person's soul that were scattered in such cases as trauma, returning the person to a better sense of wholeness.

Sun Dance - Native American sacred ceremony of gratitude to Buffalo which involved dancing around a tree which you were connected to by piercings in various places on the body.

Sweat Lodge - Ceremony where heated stones are brought into a lodge, built of blankets over bent branches, and then water is poured on the stones while prayers are prayed and songs are sung.

Vision Quest - Ceremony where one fasts in Nature for a number of days seeking and praying for a vision, direction in one's life.

Jeshua - Jesus, channeled through others as well as personal interactions

Mike - Actually "Mikimara" who is a dragon power animal

Penelope - Pelican power animal and Guardian of the Cross Roads

Though this blog is about me and my life, it inherently involves other people. I attempt to express only my views and experiences with out judgement, believing that everyone in my life is there to teach me something and that they are also there for their own lessons. Any judgements are therefore my own and subject to my own karma. Please do not incur more karma on your self by passing judgements of your own. It is all good. It is all in perfect order.

I do try to keep names out as much as possible to allow privacy. If ever you are uncomfortable, recognizing yourself here, please let me know and I will rectify the situation.