skip to main | skip to sidebar
"Your path is to be shared...It will be called The Golden Thread Road"
~White Buffalo Calf Woman

I recently left a relationship and, while I'm still a little raw from the miasma of contradictory emotions accompanying that decision and not ready to delve into that part in public, an amazing synchronicity occurred around it that deserves to be told, and can be told without breaching the complexities underlying the break up itself.

I was talking to one friend recently, and as the conversation moved onto other subjects besides my former relationship, she asked if I'd ever seen this certain Spirit Animal card deck. She had seen it at Half Price Books and had thought of getting it for me. Not only had I heard of it, it was an amazing and beautiful deck I had coveted it for quite some time, actually having earlier in the month asked a friend who sells them at her coffee shop to hold a deck for me next time they come in. "Oh, I wished I'd gone ahead and bought it for you then! And I have the perfect case to put them in. It's a beautiful, hand-embroidered tarot bag that even has a unicorn on it. It so has your name on it!" A thought flickered across my mind which I quickly dismissed. It couldn't be. There's no possible way...

A little later that evening I got a message from her saying she was at Half Price, she was buying me the deck, and there was nothing I could do about it, so there! ...I love my friends!

Then a little later after that she messaged me again, this time with photos of the deck along with the tarot bag she had mentioned. ...Holy crap! There was no possible way, but there it was. I replied my undying gratitude saying that she had just given me a bigger gift than she could ever have imagined, but that I wanted to tell her about it in person.

Fortunately it didn't take long because I was teaching a class the very next night, so she met me at the store before class and handed off her gifts to me. It was surreal seeing and holding the tarot bag again.

"Do you know the woman who made this?" I asked.
She answered with a woman's name I didn't recognize and I hesitated.
"Do you know ____?" I asked.
"Oh, yes I do!"
"She's the one who made the bag."
"Oh! You know, I think you're right. I was thinking it was the other woman but come to think of it, it was her."
"I know. And you know why I know? She was my first girlfriend after my divorce and she made this specifically for me."
"This same exact bag?!"
"This same exact bag. That's why there's a unicorn on it. She made it specifically for me. I gave it back after we broke up because it was a piece of art and I felt weird about keeping it."
"Well I guess it belonged with you after all! Wow! She gave that to me over a decade ago and I couldn't figure out why she'd give me such a beautiful piece of artwork."
I shrugged with a half smile, "Now you know why."

When I had first seen the photo of the bag the day before, my head was spinning by the inconceivable synchronicities involved. At first I was embarrassed, being self conscious from having been teased about the number of relationships I’d had since divorcing my former girlfriend/wife of 18 years about 11 years ago. Was the Universe throwing it in my face to tell me to grow up and hunker down, that here was yet another relationship that didn’t work out, so obviously there was something wrong with me?

Then another thought flashed through my mind: “Full circle.” The ending of the latest relationship and the sudden resurfacing of this relic from my first relationship went beyond coincidence. Things were coming full circle, like a completion of a lesson over a decade long in the learning. To validate this thought, I looked up and in the license number of the car ahead of me was “777.” This is an ‘angel number’ which basically indicates that the angels are watching over you and giving a huge thumbs up. So it seemed I had graduated from something and the Universe was giving me physical, tangible proof of completion. 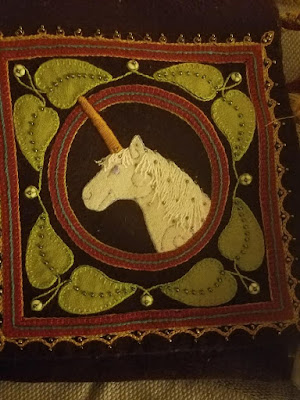 Thank you for accompanying me along my path, however long you may linger here. What you are reading is a chronicle of my explorations into my life and spirituality, particularly through my shamanic studies and my passion for cartooning.

What is 'The Golden Thread Road'? I will endeavor to answer this through the course of my blog, but in short, it is my life path. In the late 80s I had a vision in a meditation where I saw my life unfolding in front of and behind me in the form of an endless golden thread.

This vision has stayed and evolved with me through the years, forming one of the basics of a continuing and growing body of personal mythology. It is my life at its essence, distinct and unique, incorruptable and indestructable, stretching without end.

This blog is the expression of the unfolding of the lessons and challenges, thoughts and prayers, poems and art, hopes and dreams, that form this thread.

I hope you enjoy your time here. Welcome to the Golden Thread Road.

PATRICK
Patrick is a Cartoonist, Shamanic Practitioner, and Bard. He enjoys expanding his intuitive and shamanic skills, and can frequently be found napping with his kitty or watching Robin Hood movies, sometimes simultaneously.

WHERE ELSE TO FIND ME

Or to check out my latest Classes and Events~

The Collected ...
Vol 1
By Patrick Corrigan

Or other Fun Merchandise inspired by my comics and blog:

Chakras - 7 energy centers that sit at different points in the human body, corresponding with the various glands. Each one is connected with a different function of the body and how it relates to the spirit.

Chanupa -What has become known as the Peace Pipe, it is one of the most sacred forms of worship to Native cultures.

Deva - The overlighting soul, spirit, or angel of a species of animals, plants, or elements (Earth, Air, Fire, Water).

Jyorei - A Japanese form of energy healing, related to Reiki, that concentrates on the 6th and 7th chakras.
Medicine - According to Native traditions, the special power and energy of an individual, as in the unique gift they have to contribute to the world.
Psychopomp - From an ancient Greek word meaning "Guide of souls," it is working with departed souls and helping them to fully cross over into the afterlife.
Reiki - An energy healing technique that works with a person's energy system and chakras.

Shamanic Journey - A method of achieving an altered state of consciousness through repeated drum beats or rattles, by which you "journey" to the other worlds (upper world or lower world) where your spirit guides exist.

Soul Retrieval - A shamanic practice of retrieving parts of a person's soul that were scattered in such cases as trauma, returning the person to a better sense of wholeness.

Sun Dance - Native American sacred ceremony of gratitude to Buffalo which involved dancing around a tree which you were connected to by piercings in various places on the body.

Sweat Lodge - Ceremony where heated stones are brought into a lodge, built of blankets over bent branches, and then water is poured on the stones while prayers are prayed and songs are sung.

Vision Quest - Ceremony where one fasts in Nature for a number of days seeking and praying for a vision, direction in one's life.

Jeshua - Jesus, channeled through others as well as personal interactions

Mike - Actually "Mikimara" who is a dragon power animal

Penelope - Pelican power animal and Guardian of the Cross Roads

Though this blog is about me and my life, it inherently involves other people. I attempt to express only my views and experiences with out judgement, believing that everyone in my life is there to teach me something and that they are also there for their own lessons. Any judgements are therefore my own and subject to my own karma. Please do not incur more karma on your self by passing judgements of your own. It is all good. It is all in perfect order.

I do try to keep names out as much as possible to allow privacy. If ever you are uncomfortable, recognizing yourself here, please let me know and I will rectify the situation.